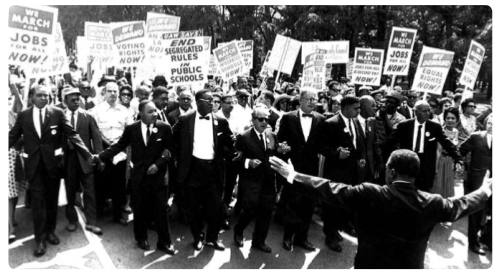 The question of what to wear at a protest—and more specifically how to appear serious without looking slightly deranged—came up in a recent fashion advice column over at the Guardian. The mostly snarky response raises some interesting points:

…no facial jewellery, no dreadlocks, no glow in the eye of self-righteous indignation fed with the oxygen of half-formed arguments, which is only just about acceptable in stoned undergraduates and is certainly not in anyone over the age of 21… Plain and practical are the obvious styles to aim for, but nothing in army green because that risks you being mistaken for a rent-a-protester, army green generally being their chosen colour. Similarly, no T-shirts or other paraphernalia that indicate you have frequented other protests: you think it proves your passion, others think you’re just a protest slut in it for the exercise and the day off work.

I tend to agree that plain and practical attire is best. It’s important to look like the people you are trying to influence. This was obviously a key strategy in the Civil Rights Movement. When millions of Americans watched well-dressed, well-mannered, black people get beaten by white Southerners on their television sets, it no doubt inspired a strong sense of empathy.

Some organizers have started to call for a return to the formal attire of the civil rights era perhaps as a way to avoid the “radical anarchist” or “crazy hippy” labels that the media have pinned on anti-globalization activists. People attending the Capitol Climate Action in DC last March were told to wear “their Sunday best.” I think this was probably a good decision since, as the first mass act of civil disobedience for the climate movement in this country, it would be defining the image and tone.

There are, however, times when I think emulating the attire of the civil rights movement would have the effect of over-dressing. Activists with crazy facial hair in a suit don’t look convincing. They look like they are mocking something. Futhermore, suit-wearing was more common in 60s. What passes for nice attire today is obviously much less formal and I think activists should at least be striving for that much.

What do you think? I’d love to hear people’s thoughs on this question.

Should we fight the system or be the change?

What to wear at a protest

One of King’s last and most overlooked writings, The World House, offers insight into what he’d advise after the Capitol attack.

Precarious moments like this show that renouncing and dismantling nuclear arms is the only way to achieve true peace, justice and security.

To prevent future far-right violence, first we need accountability. Then we must build movements capable of transforming our social, political and economic systems.

Despite flagrant assault on the Capitol, the pillars of democracy are holding

We didn’t win our demands for safety on campus, but our strike showed the power of student organizing

Why the environmental justice movement should think locally