As the United Nations’ Nuclear Non-Proliferation Conference was beginning just a few blocks away, activists came to New York City’s Grand Central Station this rainy morning to take a stand for real and rapid nuclear disarmament. The direct action followed a weekend of talks, workshops, and actions led by the War Resisters League. A handful of protesters were arrested by police for taking part in a die-in on the floor of the station with signs in their hands. 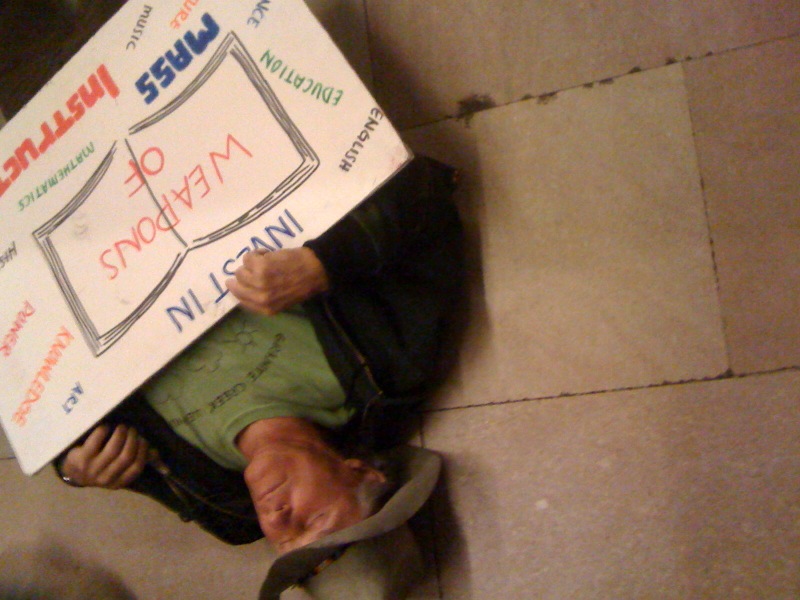 The action began at 8 am, at the height of the morning rush. Protesters—including those from the War Resisters League, the Catholic Worker, Veterans for Peace, the Granny Peace Brigade, and Think Outside the Bomb—marched in a circle around the information desk at the middle of the station’s Main Concourse, under the blue, constellationed ceiling overhead. 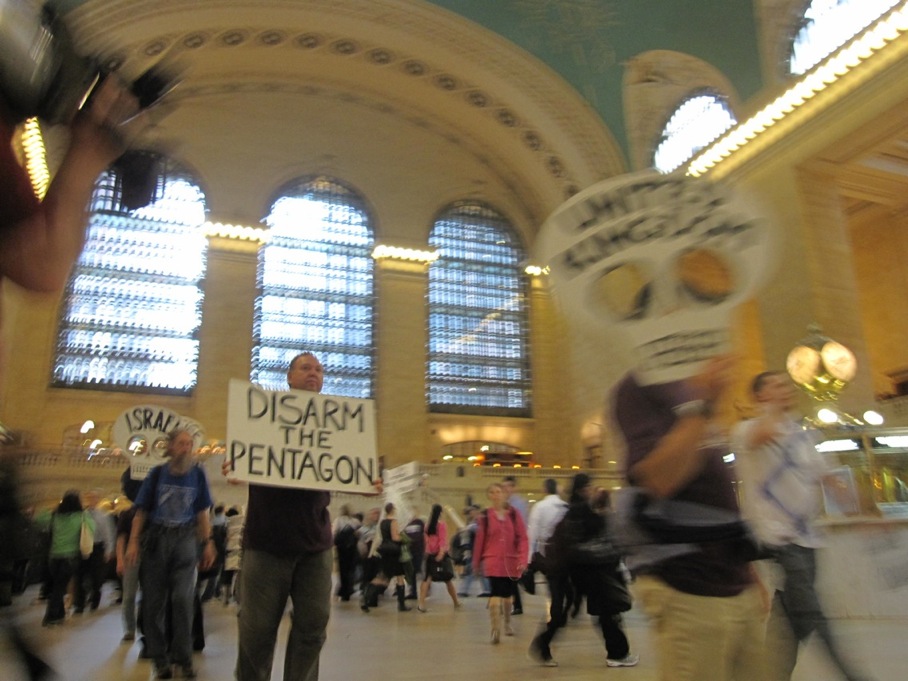 On all sides, police watched from the balconies. 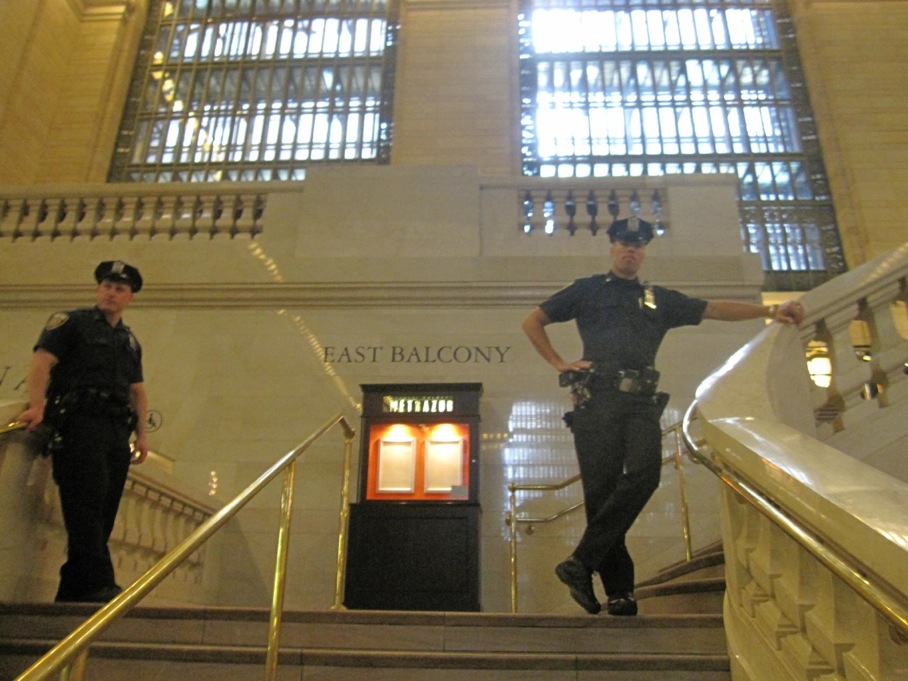 At approximately 9, outright civil disobedience began. On one of the balconies, protesters unfurled signs, which were, within seconds, removed by the police. 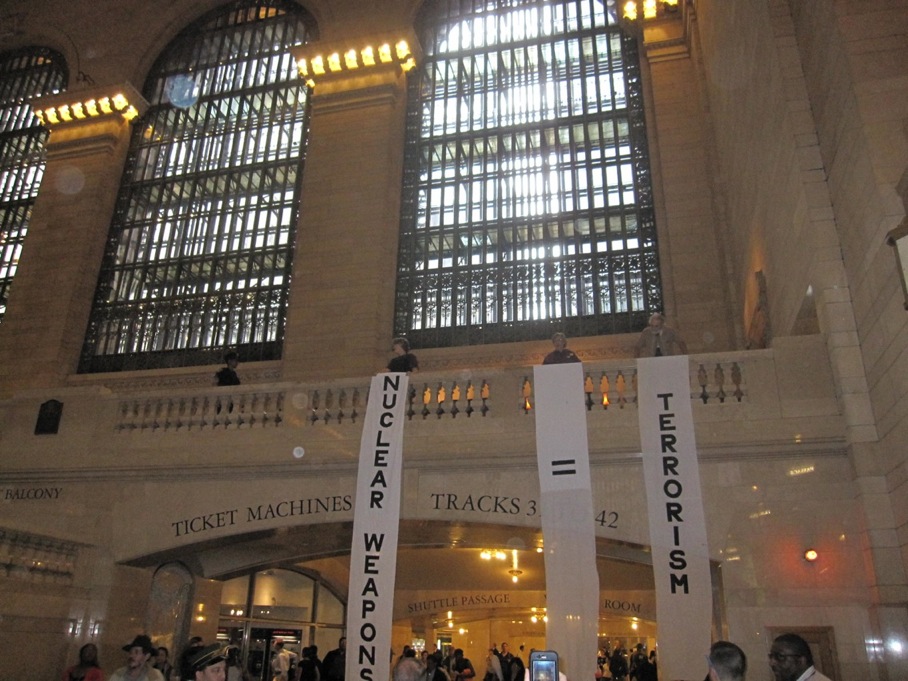 Immediately afterward, the die-in began. One by one, the die-ers were arrested by police, as they sang “Ain’t Gonna Study War No More.” Waging Nonviolence contributor Frida Berrigan, pictured below, was among the first. 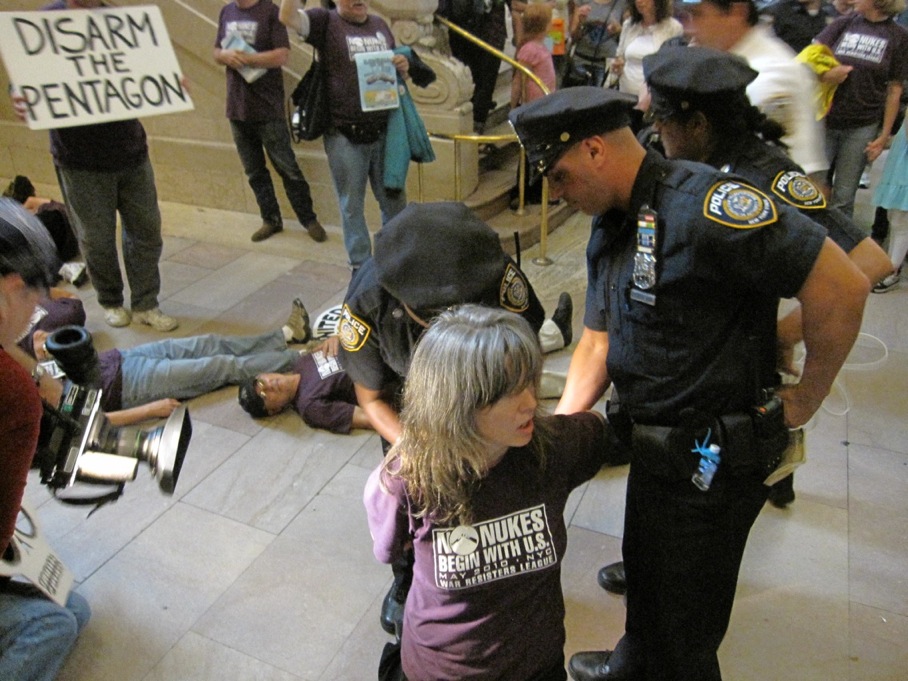 Bystanders gathered around and joined in the singing. The woman pictured at left was by far the most eager, crying out for her country to spend its resources on education, not wars. 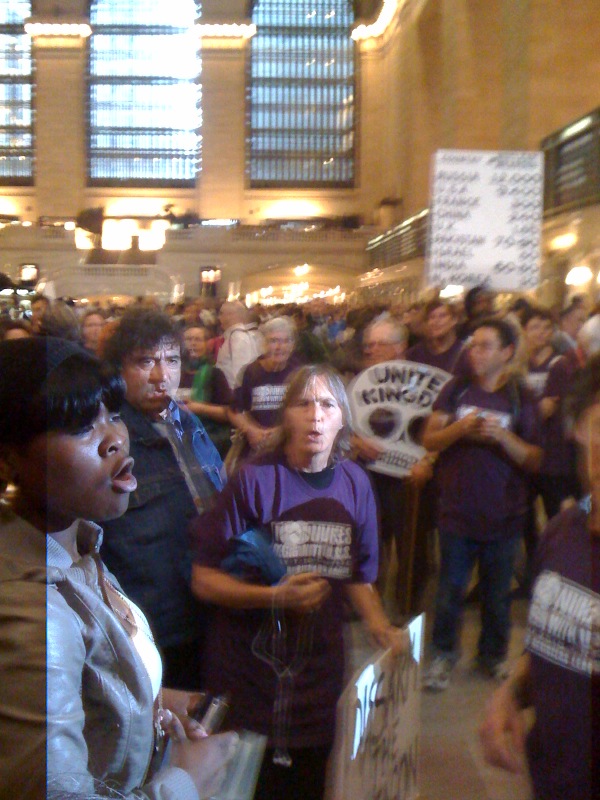 The last to be arrested was Liz Proefriedt, an elderly nun from the New York activist group Kairos, holding a sign of a skull with “USA” written on its forehead. Only with a great deal of pain was she lowered down to the floor, only to be picked up and carried off by the police. In the background, with a green hat, is a representative from the National Lawyers Guild. 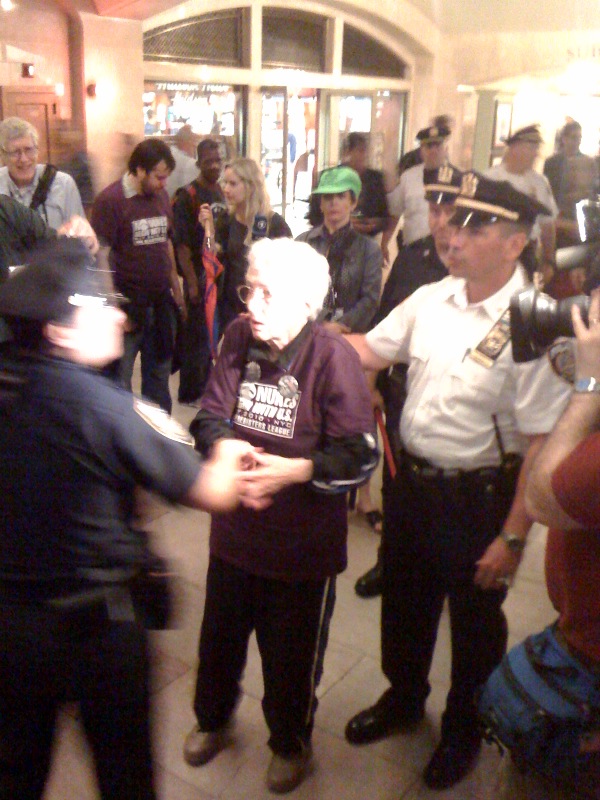 With a busy location, symbolic timing, and the willingness to be arrested, a few dozen protesters made their point before thousands of people. Most observers, of course, rushed by, barely seeming to notice. Only a few voiced any opposition to the message (one man chanted, as he walked through the Concourse, “U-S-A, all-the-way!”).

One protester told me she wasn’t surprised that there wasn’t much evidence of mainstream media coming out to cover the action. One wonders whether that would be different if it were a Tea Party protest instead. Yet here we see a cornerstone of the nonviolence tradition that doesn’t seem to be part of the Tea Party movement so far—the insistence on self-sacrifice.

How communities in El Salvador are organizing to block mining projects

No nukes in Grand Central