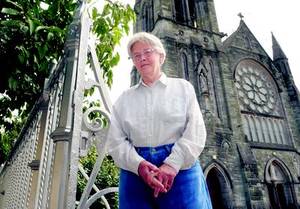 This Sunday, September 26, Jennifer Sleeman, an 80-year-old Catholic convert from Clonakilty in Cork, Ireland, is calling on Catholic women to boycott Mass. In an interview with the Irish Times, Sleeman explained her action this way:

Stay at home and pray for change. We are the majority. We may have been protesting individually but unremarked on, but together we have strength and our absence, the empty pews, will be noticed.

Whatever change you long for, recognition, ordination, the end of celibacy, which is another means of keeping women out, join with your sisters and let the hierarchy know by your absence that the days of an exclusively male-dominated church are over.

Men are of course welcome to support the boycott as well.

Sojourners editor Rose Marie Berger has set up a Google Map that shows the locations around the world where women have agreed to the boycott. If you want to be included on the map, leave Rose a comment on her site or if you’re tech savvy you can update the map yourself.

In general, I think this is a great idea. Given that the church is such a large institution though, to have a real effect a boycott like this would likely need to include millions of Catholics. They would also need to be outspoken about their reasons for not going to church, otherwise the Vatican might not make the connection.

And although it would be difficult, the boycott would need to be an indefinite. Staying away from church for one Mass will be easily ignored. That said, this one-day action could prove to be an important first step towards building a larger movement for change in the Catholic Church.

What ‘Orange is the New Black’ got wrong about compassionate release

‘A Sunday Without Women’ at Mass