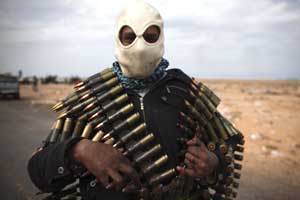 With the Libyan uprising against Qaddafi turning more and more toward violence in recent days and weeks, we have not been reporting on the daily developments of the struggle – like we did during the predominately nonviolent pro-democracy movement in Egypt – because this site is devoted to covering nonviolent resistance.

In the New York Times yesterday, Erica Chenoweth had a timely op-ed that explained why the Libyan resistance would have a greater likelihood of bringing down Qaddafi had it remained nonviolent.

Why? For one thing, people don’t have to give up their jobs, leave their families or agree to kill anyone to participate in a nonviolent campaign. That means such movements tend to draw a wider range of participants, which gives them more access to members of the regime, including security forces and economic elites, who often sympathize with or are even relatives of protesters.

What’s more, oppressive regimes need the loyalty of their personnel to carry out their orders. Violent resistance tends to reinforce that loyalty, while civil resistance undermines it.

To anyone who is up on this field of study, Chenoweth’s arguments are not new, but it is exciting that she had such a prominent venue to air them. (It’s hard to imagine her being able to publish this piece in the Times had the nonviolent uprisings in Tunisia and Egypt not happened.)

In anticipation of the backlash and recognizing the limitations of an op-ed, Chenoweth, who is an assistant professor of government at Wesleyan University, wisely posted an extremely helpful “Skeptics Guide to Nonviolent Resistance,” on her university website to expand on her points and address likely questions.

In response to a question about why the nonviolent movement failed against Qaddafi, for example, Chenoweth writes:

First, the nonviolent movement may have over-relied on a single tactic—protests—to pursue their aims. In Unarmed Insurrections, Kurt Schock argues that when movements rely too much on rallies or protests, they become extremely predictable—in other words, they become sitting ducks for regime repression. Successful movements will combine protests and demonstrations with well-timed strikes, boycotts, go-slows, stay-aways, and other actions that force the regime to disperse its repression in unsustainable ways.

If you have the time and want to have a better grasp on how to critique what is happening in Libya through the lens of nonviolence, both Chenoweth’s original op-ed and her follow-up are really the best place to start.

Why Libyans should not abandon nonviolent resistance