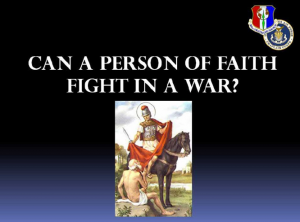 According to a press release today from the secularist Center for Inquiry:

The United States Air Force has been citing Christian teachings in its missile officer training sessions by referencing passages from the New Testament, according to recently released documents under the Freedom of Information Act (FOIA).

Reports show the mandatory Nuclear Ethics and Nuclear Warfare session, which takes place during a missile officer’s first week in training, is led by Air Force chaplains and includes a discussion on St. Augustine’s Christian “Just War Theory.” Also included in the PowerPoint presentation is a slide containing a passage from the Book of Revelation that attempts to explain how Jesus Christ, as the “mighty warrior,” believed war to be “just.”

The presentation goes on to say that there are “many examples of believers [who] engaged in wars in [the] Old Testament” in a “righteous way” and notes there is “no pacifistic sentiment in mainstream Jewish history.”

The CFI’s concern, of course, is that religious materials are being used in an obligatory military training course. Of course this is hardly the first time such a thing has happened; the US military makes quite a habit of infusing its literature and culture with religious tropes—to the point, in some cases, of creating a hostile environment for people of faiths other than the one being promoted.

But perhaps the more pressing concern is the way that these religious resources are being used to assuage trainees’ consciences about the work they are learning to carry out. If there is any good news about this document at all, it is its recognition that people will generally come with moral and religious qualms with launching nuclear weapons in the first place, and have to be trained otherwise. That’s a start.

First, on the matter of Augustine and just-war theory, I’m reminded of a passage from an interview I did with Andrea Bartoli, a leader of the Catholic organization Sant’Egidio. He’s a defender of just-war theory—the weight of Catholic teaching leans toward it—but he reminded me that the real essence of the theory is not to justify war, but to restrain it, to contain it, and to end it:

Augustine discusses peace about 2,500 times and war a couple of dozen. Everybody discusses what Augustine said about just war, but they usually fail to recognize that he speaks about just peace much more. Sant’Egidio focuses on the parts of Augustine that focus on peace. War is a possibility. War is a human choice. But from our perspective, the Christian position cannot be but a peaceful one, both in terms of being peaceful ourselves and in terms of being peacemakers. We don’t begin with theories. We work for peace because, to the poor, war is the worst of all conditions—Andrea Riccardi called it “the mother of all poverty.”

I don’t think the claim that Jesus was a “mighty warrior” requires much comment. Where the Air Force got that idea is beyond me.

There is, undeniably, warfare in the Hebrew Bible. Christians generally see the revelation of Christ as abrogating that history, to some extent. See the Sermon on the Mount. For Jews, witness the centuries upon centuries of peaceful, courageous persistance by Jewish communities living in often hostile lands. Today, witness examples like Albert Einstein and Abraham Joshua Heschel and the Jewish Peace Fellowship. Witness Israeli conscientious objectors.

None of the document’s distortions, however, should be surprising. If you’re out to get people to incinerate each other by the thousands and millions, no sophisticated religion or philosophy in the world—undistorted—will leave you with a clean conscience.

To police of good conscience: These protests are for you too

Since when did Jesus join the Air Force?