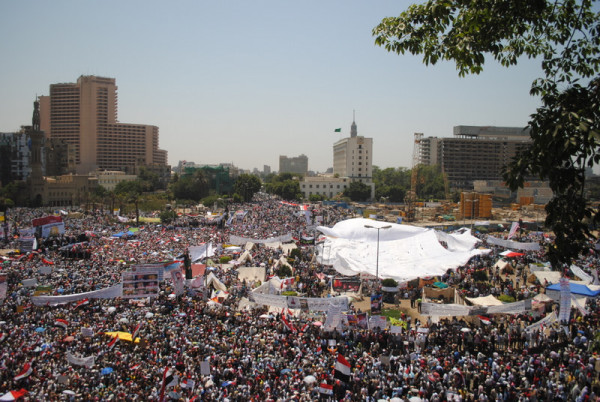 After the end of Friday prayers today in Cairo, people burst out of the mosques and into the streets for a “Friday of Persistence,” expected to rival the turnout of the protests that brought down Hosni Mubarak earlier this year. Their demands include the removal of remaining elements of Mubarak’s regime from the government, as well as speedy and transparent trials of former ministers and police involved in the killing of protesters during the revolution, and an end to the interim military government’s attempts to crack down on dissent. Some people are demanding a new constitution before elections take place, and to delay the forthcoming elections further. The list is a bit different depending on where you look. But, basically, young Egyptians are out to finish what they started.

Let’s look at some tweets from the streets. (Ha.)

#tahrir is back to its heyday! The ppl demand the fall of the regime. #ramyessam to sing against #scaf #jul8 #noscaf #jan25 (@joerizk1)

Tent city in #Tahrir is where the fun is. It’s shade which is a blessing in this weather, there’s singing & music and smaller chants #jul8 (@MohammedY)

Tahrir chants could be heard loud in whole down town as Jan25… Revolution Spirit is back on track! #Tahrir #July8 #8July #Jul8 (@eyadnour)

According to reports from AhramOnline, protesters in Suez are making their own arrests of troublemakers trying to turn the day violent:

The Armed Forces in Suez are distributing water to the protesters. One protester stands on a military van and chants: “the Army is ours, but the SCAF [Supreme Council of the Armed Forces] is theirs.” A few minutes earlier, military personnel fired rounds into the air as they approached the square to arrest thugs detained by the protesters.

Protesters in Suez arrested an unidentified person who shot bullets into the air from a nearby place, wounding one person. He was soon handed over to the military police. Earlier, four other suspect individuals were handed to the military police by the popular committees organising the protest.

They’re out in Alexandria, too:

The spirit of #jan25 is back at #alkaed. #alexandria#jul8 but MB are trying to disperse the crowds (@Zeyadsalem)

The “MB,” of course, is the Muslim Brotherhood, one of the leading opposition parties. At first reluctant, the Brotherhood finally decided to join the protests on Thursday evening as a show of solidarity with the people’s discontent. Clearly, however, their presence is an ambivalent one. While the Brotherhood is eager to capitalize on public anger against the remnants of the old regime, they’re not supporting calls for constitutional reform before the elections, or for delaying a vote. Much better-organized than the other fledgling opposition parties, they stand to benefit from holding elections before the others get a chance to mobilize.

Politics like these are a reminder that the situation is different than it was in January and February, when the whole country could unite around the common goal of unseating a dictator. Now, as different elements of the opposition compete for power in the new Egypt, people are returning to Tahrir Square and other city-centers like they did before, hoping to regain the sense of earlier unity and remind the politicos of what the people expect. Independent trade unions have declared an open-ended sit-in. The army, which sided with the protesters before, is now at once with them in the streets and against them in the interim government.

Some are suggesting that the time for big protests in Tahrir has passed, and that the focus should turn to building political parties and campaigning for elections. But many, many Egyptians evidently feel that the game is still rigged against them. Today, they’re out to make it clear: they will persist.