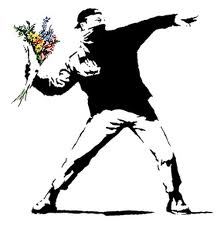 Last Friday night, in a conversation with a longtime Occupy Wall Street organizer while walking (and skipping) toward an elusive Spokes Council meeting, we got to talking about violence. We’d done so before, always enjoyably; he’s a nimble conversationalist and well-dressed to boot. He’s also one of those in the movement who declares his openness to violent tactics if necessary. To him, the violence of state oppression ultimately justifies whatever means it might take to remove it. Revolutionary violence on the part of the oppressed is not really violence at all. Breaking windows is not violence. Nor, presumably, is a well-placed bomb.

As he sees it, a commitment to nonviolence only constrains a movement, preventing it from doing any meaningful resistance (despite the fact that Occupy Wall Street has effectively made just such a commitment). It was in explaining this that he reminded me of how, at Berkeley, the authorities described protesters locking arms as violent. If they can say that, he concluded, then nonviolence is by definition tantamount to passivity.

True—but only if we’re willing to accept the kind of wordplay that somehow passes muster at Berkeley.

Here’s some of the statement from UC Berkeley Chancellor Robert Birgeneau following an incident of police clubbing protesters:

It is unfortunate that some protesters chose to obstruct the police by linking arms and forming a human chain to prevent the police from gaining access to the tents. This is not non-violent civil disobedience. By contrast, some of the protesters chose to be arrested peacefully; they were told to leave their tents, informed that they would be arrested if they did not, and indicated their intention to be arrested. They did not resist arrest or try physically to obstruct the police officers’ efforts to remove the tent. These protesters were acting in the tradition of peaceful civil disobedience, and we honor them.

We regret that, given the instruction to take down tents and prevent encampment, the police were forced to use their batons to enforce the policy.

Added the university police force’s Captain Margo Bennett: “The individuals who linked arms and actively resisted, that in itself is an act of violence.” (H/t Rei Terada’s thoughtful analysis.)

Wrong and wrong. The damage of these statements is twofold. Firstly, they ask us to believe that it is violent to link arms willfully with another willing person, harming no one and no thing. Really? The reasoning appears to be that posing any obstruction to the work of the police is doing violence. Who could possibly believe that, short of a totalitarian? Secondly, by defining violence this way, Bennett and Birgeneau invite others to otherwise redefine it according to their own particular theory of how society should be arranged.

I hope we know better. There’s no need to let anyone—Bennett and Birgeneau, or Molotov-throwing activists—tell us that violence constitutes something other than the obvious. We know what violence is; we know what it means to be peaceful. Violence is harming other people—physically or otherwise—and being peaceful is not.

A simple definition for nonviolent resistance is simply to do something one should be doing (even if you’re told not to) or to not do something you shouldn’t be doing (even if you’re told you must). It’s using means worthy of the ends you want to achieve, acting in accordance with the world you want to create. Once you reach your goal, after all, it’s really hard to do away with the means that got you there. The fact that my conversation at Occupy Wall Street happened on Armistice Day should’ve been a hint: wars don’t end war, they breed more. Locking arms with one’s comrades, however, looks more like a glimpse of utopia.

Among the most eloquent defenses of nonviolence in the Occupy movement has been Rebecca Solnit’s essay “Throwing Out the Master’s Tools and Building a Better House,” which appears in the second n+1 gazette and online at ZNet. She makes much the same argument I just have, as well as speaking out against the “authoritarianism” of a violent minority within a movement. She also offers an eloquent passage on the question of property damage:

I want to be clear that property damage is not necessarily violence. The firefighter breaks the door to get the people out of the building. But the husband breaks the dishes to demonstrate to his wife that he can and may also break her. It’s violence displaced onto the inanimate as a threat to the animate.

Quietly eradicating experimental GMO crops or pulling up mining claim stakes is generally like the firefighter. Breaking windows during a big demonstration is more like the husband. I saw the windows of a Starbucks  and a Niketown broken in downtown Seattle after nonviolent direct action had shut the central city and the World Trade Organization ministerial down. I saw scared-looking workers and knew that the CEOs and shareholders were not going to face that turbulence and they sure were not going to be the ones to clean it up. Economically it meant nothing to them.

Nor is nonviolence the preserve of the privileged. If this past century has taught us anything, it is the power of nonviolence in the hands of oppressed people. Largely nonviolent uprisings—from India to Serbia to the Philippines to Tunisia—prevailed over ruthless regimes. Some of the poorest, most powerless people in the world built movements capable of dispatching dictators and expelling empires. This isn’t to say that one should condemn those who use violence in self-defense and out of desperation. But it does mean that, if one wants to help them, there are better things to offer than a gun.

When Birgeneau equates locking arms with violence, he is trying to justify his own violence, which he deemed necessary for the sake of his university. In the process, though, trading common sense for the semblance of a clean conscience, he invites others to claim that acts of violence are actually otherwise.

Don’t let them confuse you about violence