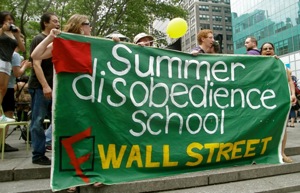 Last Saturday saw the kickoff of Occupy Wall Street’s Summer Disobedience School (OWSDS), described in its “Curriculum” as a “twelve-week training program that will empower us to map, target, and disrupt sites of capitalist injustice across the city with a wide range of creative tactics accessible to people with all levels of experience.” The program, developed by the Direct Action Working Group, is divided into four three-week quarters, with each quarter taking a different city park as a staging-ground: Bryant Park, Central Park, Washington Square Park and, ultimately, Liberty Plaza. While focused primarily on tactical training, OWSDS is also a long-term strategic platform for the summer in advance of the one-year anniversary of OWS on September 17 — a date that is already looming large in the imagination of the movement under the sign of “Black Monday.”

The inaugural proceedings last Saturday at Bryant Park showed a theatrical display of school spirit. Around 60 Occupiers — observed at a cautious distance by a dozen or so police officers — gathered in a semicircle, and a large banner resembling a chalkboard was unfurled to create an impromptu stage. To the sound of Alice Cooper’s “School’s Out,” a troupe of flag-bearing cheerleaders popped out from behind the banner, performing a kind of pep rally that concluded with the cry, “School is now in session!” and a “Pledge of Disobedience” spoken through the people’s mic that appropriated the ritual cadence and democratic claims of its patriotic source-text:

We pledge disobedience
to the power of Wall Street
and the government of the 1 percent
One No
Many Yeses
Another world is possible
with liberty and justice for all.

This was followed by brief orientation remarks by a headmasterly Amin Husain. Citing the core principles of OWSDS — education, empowerment, imagination, action — Husain emphasized the importance of creating space for everyone to “step up” in the planning and execution of direct actions, rather than relying on the same familiar faces to lead.

Next up, a group of facilitators ran through several “invisible theater” scenarios for disrupting business as usual in a bank lobby — ranging from slowdowns with the teller, to a group “melting” into a die-in on the floor, to going “civilian” by instantly snapping out of collective activity and disappearing as individuals into the normal flow of urban life.

The latter tactic was critical to the next step of the OWSDS program at Bryant Park. The large assembled group broke into four action-teams consisting of 15 to 20 people, with each team responsible for filling necessary roles like scouting, communications, flyering and documentation. But there was a twist: The precise location of the targets for the actions were not revealed to the teams until the very last moment, and, rather than approach the targets with a raucous march that would draw an immediate confrontation with police, the teams were to make their way in civilian mode to their targets, where they would re-converge for the planned disruption.

One action, for instance, was at a branch of Wells Fargo, a major recipient of bailout money and a key investor in the private prison industry. Protesters gathered there one by one, with a few police officers unsuccessfully attempting to follow them as they made their circuitous way to the target; around a dozen went inside and began to speak loudly on their cellphones about the illegitimate practices of the company, gradually escalating into a disruptive cacophony, while others moved the lobby furniture around the space. Meanwhile, some members of the team documented the action, while around 10 more picketed and flyered outside. Employees and customers of the bank were variously curious and flummoxed, and before any confrontation could take place or police could be called to the scene, the exercise was over.

Twenty minutes later, all the action groups made their way in civilian mode to Times Square; there, marking a first for Occupy Wall Street, demonstrators were able to position themselves on the steps of the red amphitheater, where they unfurled banners and performed “The People’s Alarm,” a reiteration of the People’s Gong, but addressed to specific site of Times Square (which they called the “Fantasy Factory of Wall Street.”) From Times Square, the entire group marched together back to Bryant Park, where a debriefing was held and the planning process for the subsequent week was handed off to a new, self-selecting group of volunteers with varying levels of experience. Participating in the meeting — but stepping back considerably — were the organizers from the previous week. As the debriefing and planning meeting unfolded, a primary principle of OWSDS became clear: The success of  these introductory training exercises would be judged not so much on whether they achieved any immediately measurable political result but, rather, on how effectively people were able to plug into the overall process of learning, organizing and confidence-building.

While the action-planning group met, Occupy University held two classes (“Poetry and Political Feeling,” “Radical Economics”), and the National Lawyers Guild facilitated a know-your-rights training. All in all, by late afternoon, around 200 occupiers had gently taken over the corner of the Bryant Park lawn in a total of four simultaneous assemblies, with many others casually mingling and lounging among other users of the park.

Festive displays, small-scale disruptions, temporary pop-up classrooms in recreational spaces — from this account, OWSDS might sound surprisingly “soft” for a movement that a month ago was calling for citywide general strike. But OWSDS speaks to the core radicalism of the movement with its emphasis on empowerment, skill-sharing and horizontal pedagogy. A major challenge of OWSDS will be to remain accessible with a wide spectrum of entry points, while nonetheless fostering an ethos of militant courage. Indeed, students are encouraged to develop “personal escalation calendars” tracking their progress in over the course of the summer.

Citing a quotation from Henry David Thoreau — “Disobedience is the true foundation of liberty” — the educational rubric of OWSDS echoes the rich history of activist counter-institutions such as Freedom Schools of the 1960s and the Boot Camps of the Ruckus Society. Most immediately, though, the Summer Disobedience School is an extension of the movement’s own weekly Spring Training exercises in the financial district during the build-up to May Day.

Spring Training had a dual function. It both provided a set of tactics capable of being replicated in concrete actions, while also providing to its participants an embodied cultural narrative of being nonviolent warriors in the coming spring offensive. Just as that offensive culminated in May Day, the Summer Disobedience School looks toward September 17 as its “Graduation.”

The emphasis that the OWSDS Curriculum places on empowering small action teams is a response to the relative dearth of disruptive actions on May Day, despite the care that went into zoning out the city into “red” (likely risking arrest) and “green” action areas in concert with coalition partners. Direct Action member Sandra Nurse notes that the movement as a whole is still undergoing a learning process: “If we want to have thousands of people doing smaller actions that create a larger disruption, we need to build that culture,” she says. “Ideally, every single person should show up to a mobilization and feel empowered to do an action, train others for an action or facilitate an action team. We need base lines of communication, a common framework, a simple platform from which we can leap.”

Influenced by the example of ACT UP affinity groups, OWSDS organizers envision its small-scale model spreading to fill the whole city. “Just a few folks acting with precision can blockade an intersection, shut down a bank, even occupy a building,” explains Direct Action member Mark Adams. “Imagine that scaled up to entire sectors of the city.”

The lessons of May Day will likely be major points of reference as OWS begins the planning process for September 17. Organizers are anxious not to let institutional coalition partners pull Occupiers’ energy away from more radical disruptions. But while there can be real tensions between affinity-group actions and broad-based, May Day-like coalitions with other organizations, they are not mutually exclusive. OWSDS could function as a platform for developing new creative tactics for people in existing campaigns wishing to move into more disruptive territory than usual — perhaps building on the connections forged around the 99 Picket Lines project, for example.

In what was perhaps a strategic move to protect September 17 from being preemptively branded by Occupy’s allies on the institutional left, a short but dramatic call went out in mid-May for all Occupys to converge on New York for a “Black Monday” shut-down of the financial and commercial hubs of Manhattan. This is a task well-suited to OWSDS, given its geographical diversification beyond the Financial District, based on the recognition that “Wall Street is everywhere.” The name “Black Monday” strikes a dark note of crisis and uncertainty, yet it is also compelling in its deliberate emptiness, its sense of an imaginary void waiting to be filled by an unforeseeable diversity of actions and voices.

Whoever or whatever it  involves — debt-slavery is well-poised to become a major connective issue between students and other sectors, for instance — Black Monday will be above all an occasion to celebrate the revolutionary crack in the system that the movement has effected, and the other worlds that it is in the process of building through the principles embodied by the Summer Disobedience School. Seen in this light, Black Monday is less an all-or-nothing messianic endgame than just one more in an ongoing series of teachable moments. In these, any opposition between means and ends, tactics and strategy, and internal culture and outward-facing movement-building breaks down, creating a continuous fabric of education and liberation.

Yates McKee is an art critic and co-editor of the magazine Tidal. His work has appeared in venues including October, The Nation and Grey Room. He is the co-editor of Sensible Politics: The Visual Cultures of Nongovernmental Activism (Zone Books, 2012), and in 2015 has a forthcoming book from Verso press tentatively titled Art After Occupy.

Art after Occupy — climate justice, BDS and beyond

The Supreme Court, marriage equality and the pace of change