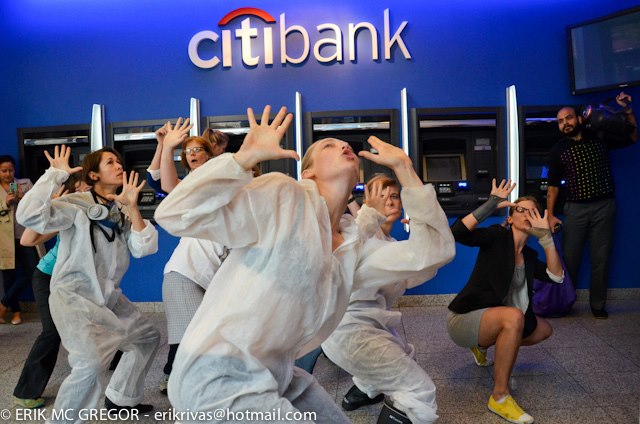 Last Friday, over a dozen New Yorkers delivered a message to the big banks funding a dangerous energy project in the heart of Manhattan: “No fracked gas pipeline in the West Village and no fracking in New York.” Wearing gas masks and hazmat suits they danced in the lobbies of Chase, Wells Fargo and Citibank branches while singing the Britney Spears song “Toxic” (see video below) with the slightly modified lyrics: “Where’s the money from? The big banks. Take your money out of the fracking game…”

The practice in question — known as hydraulic fracturing, or fracking for short — is a process by which unregulated chemicals are pumped deep into the earth to fracture the bedrock and extract methane gas. Not only does this process threaten drinking water, but when the gas is transported to pipelines, it has been known to leak and sometimes, in the case of a pipeline in San Bruno, California, cause explosions. When the gas reaches its final destination, it is burned, releasing carbon dioxide into the atmosphere — further exacerbating global warming. From start to finish, fracked gas is bad news.

Because of the dangers of fracked gas, New York State currently has a moratorium on fracking. But that has not stopped politicians from making plans for moving forward. Governor Cuomo is advocating for gas development in the northern part of the state near the reservoirs that supply New York City’s drinking water and New York City Mayor Michael Bloomberg has allowed Spectra Energy to begin construction on a pipeline that will bring fracked gas into the West Village from New Jersey. While some of the gas may be used in New York, the pipeline would increase New York’s gas export capability to growing European markets, where fracking has been banned due to concerns over groundwater contamination.

Beyond the dangers of fracked gas to water, communities and the climate, activists have more reasons to be concerned. The U.S. Department of Transportation found 17 safety inadequacies in Spectra’s Operating and Maintenance procedures including the failure to create an adequate surveillance plan for corrosion and leakage, and the failure to designate a person responsible for meeting the standards of local Emergency Plans.

The “Toxic” flash mob video comes at an important time in the campaign to stop the Spectra pipeline. Concerned citizens and activists led by the Sane Energy Project (SEP) and Occupy the Pipeline have been working hard to stop Spectra on many fronts.

SEP is spearheading the campaign’s educational and legal efforts. They have distributed thousands of leaflets and have been at the forefront of ensuring that New York’s West Village community is aware of the pipeline project. In September, SEP, along with a coalition including Food and Water Watch, NYC Friends of Clearwater, NYH20, Village Independent Democrats, United for Action and residents of the West Village filed a lawsuit against the Hudson River Park Trust for leasing the land to Spectra.

Meanwhile, Occupy the Pipeline is leading the campaign’s direct action efforts. They have staged over a dozen rallies and marches, including several marches around the radius of the blast zone that would be created if the Spectra pipeline blew up like the one in San Bruno. In the face of increasing construction on the pipeline, six people decided it was time to escalate their tactics to stop the pipeline. On September 12, they entered the construction zone and locked themselves to the equipment — effectively shutting down the operation for the afternoon.

With only six weeks until construction is completed, Occupy the Pipeline decided to try a new strategy for outreach. This time, they decided to try the fun approach. By creating a music video that parodies the popular Britney Spears song, Occupy the Pipeline hopes to reach people beyond the West Village and inspire them to take direct action to protect public health and the climate, and shut the pipeline down.

Linnea Paton is a climate justice activist living in Brooklyn, NY. She began her work organizing non-violent civil disobedience against fossil fuels with Students for a Just and Stable Future in Boston. She now works with Occupy Wall Street and Disrupt Dirty Power exposing the connections between Wall Street and the destruction of the planet.

Global Divestment Day celebrates the power of a growing movement

How our big, cheap wedding fought consumerism and helped the planet

A citizen’s initiative puts the Paraguayan justice system in question