Fifty years ago this week, John Kerry and Jane Fonda were both in Detroit, for the groundbreaking Winter Soldier Investigation. Nowadays both are making headlines with actions on the climate crisis, but in February 1971, they were organizing with equal passion against a war. It should be seen as one of the proudest moments of their lives.

Neither were the stars of Winter Soldier: that honor goes to the more than 300 veterans who had crowded into the Howard Johnson hotel to bear witness to the fact that the Vietnam War was one long war crime.

With the upcoming trial of Lt. William Calley, who had ordered the killing of hundreds of civilians at “Pinkville” in My Lai province, the new but growing Vietnam Veterans Against the War, or VVAW, had collected dozens of testimonies — evidence that My Lai was anything but uncommon.

In February 1971, a decorated battalion commander in Vietnam had just filed charges that some troops in his brigade had engaged in “transmission of electrical shock by means of a field telephone [and used on a Vietnamese girl] a water rag treatment which impaired breathing, hitting with sticks and boards, and beating of detainees with fists.”

A few months earlier, some VVAW members had participated in a Washington, D.C. event they called a Citizens Commission of Inquiry. They described atrocities, which attorney Tod Ensign linked to specific military policies: “search and destroy,” “free-fire zones,” “take no prisoners.” These policies created an overall dark strategy, in which “search and destroy” missions were conducted without taking Vietcong prisoners, “disposing” of the enemy in other ways, and establishing “free-fire zones” such as “Pinkville.”

The depositions outlined the results of these three core policies. Soldiers described “search and destroy” missions with no internal prisoner-of-war facilities. This led to commanders simply killing captives, rather than making them prisoners with rights under the Geneva Conventions. “These were the policies dreamt up at Harvard and converted into military strategies in Washington,” added Ensign, who would go on to represent many dissident military personnel and founded CitizenSoldier.org. “When the vets heard Westmoreland say that My Lai was just a couple of bad apples, they couldn’t believe it.”

Organizers agreed that it was time for a bigger event, to ensure that Congress and the media received this information. Jane Fonda had been supporting GI activists for years and was working with Hollywood peers on a traveling show called “F.T.A.,” a set of black-comedy skits starring Donald Sutherland and Holly Near — with whom she’d tour U.S. military bases around the world — that used some of those testimonies. She insisted that rather than New York or Washington, their national media event should be held in Detroit, the heart of working-class America.

The Detroit event, held from Jan. 31 to Feb. 2, 1971, felt needed after the New Year, as the military commenced Operation Dewey Canyon, an incursion into Laos and Cambodia. As the Nixon administration battled press inquiries about the incursion and the in-progress Calley trial, VVAW dialed up the pressure with a full-page ad in the February 1971 issue of Playboy, picturing a coffin draped in an American flag. The text accompanying it read, “In the last 10 years, over 335,000 of our buddies have been killed or wounded in Vietnam. And more are being killed and wounded every day. We don’t think it’s worth it.”

Day after day, these very young men told horror stories of what had become normal in Vietnam.

In February, nearly 1,000 people crowded into rooms at a Howard Johnson, 300 or so giving testimony over the event’s three days. Acting as older statesmen of sorts were Lt. John Kerry and World War II bombardier Howard Zinn, each taking notes with a lawyer’s intensity.

Kerry had been active in VVAW for months and had come to the attention of the FBI at a September VVAW event at Valley Forge. At that event, the young veteran the FBI called “John Carry” gave a speech that prefigured the testimony he would eventually give to the Senate Foreign Relations Committee: “We are here to say that it is not patriotism to ask Americans to die for a mistake and that it is not patriotic to allow a president to talk about not being the first president to lose a war and using us as pawns in that game.” Kerry has long downplayed his role in VVAW, which has been used by his political enemies to somehow paint him as unpatriotic. But what he and Fonda were doing that week was the most American thing they could do — nurturing free speech and dissent.

You can now watch footage from that week in Detroit on YouTube: The footage shows a characteristic mix of youth, openness, high spirits and that intense quiet that comes from having seen the indescribable. Day after day, these very young men told horror stories of what had become normal in Vietnam.

It’s more important than ever to remember and acknowledge the veterans who peacefully organized to tell truths only they knew.

That week, soldiers become veteran-activists. To counter the idea that they were lying, soldiers showed slides and lifted their discharge papers to cameras. Scott Camil, whose cherubic face seemed embraced by his short beard, spoke softly as he described abuse of Vietnamese civilians. Bill Perry urged the room to explore “what causes people to act this way, and what we can do to combat [that].” The testimony horrified even some of the event’s organizers. “[Hearing such horrors described] was jarring,” John Kerry told the New York Times 35 years later. “We’d all heard the stories — just scuttlebutt. But not first-hand.” To these veterans, giving testimony before the media was the only way to alert the American public that the whole war was an atrocity.

Unfortunately, Winter Soldier was a bust. The Detroit papers ran features every day, which were carefully copied and filed by the FBI. But CBS News refused to use the hours of film they had shot, and the “newspapers of record” (the New York Times, Washington Post and Chicago Tribune) ran scant items compared to their ample My Lai coverage. If My Lai had once thrown the moon landing off some newspaper front pages, NASA struck back during Winter Soldier: The news cycle featured Apollo 14’s Alan Shepherd playing golf on the moon. It would take decades before information about these atrocities was declassified and became the landmark book by Nick Turse, “Kill Anything That Moves: The Real American War in Vietnam.”

With another group of activist veterans now in the headlines — those involved in the racist Capitol insurrection on Jan. 6 — it’s more important than ever to remember and acknowledge the veterans who peacefully organized to tell truths only they knew. 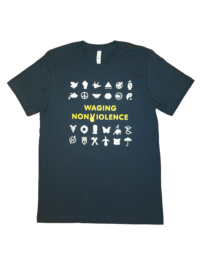 Waging Nonviolence depends on your support. Become a sustaining member today and receive a gift of your choice.

Their example inspired post 9/11 veterans to hold a four-day event in Silver Spring, Maryland in 2008 called Winter Soldier: Iraq and Afghanistan. That event included “Rules of Engagement” panels about civilians in the crossfire and separate panels on sexism, racism and post-traumatic stress disorder. Nonetheless, like the 1971 Detroit event for which it was named, Winter Soldier was mostly ignored by both the mainstream media and the government — as was the smaller “Winter Soldier on the Hill,” when veterans testified before Congress six weeks later.

Still, such gatherings empowered vets to take future actions. And Veterans For Peace is planning to hold “Winter Soldier 2021” in March, featuring vets from both of the prior events and a final panel of both current servicemembers and law-enforcement officers now trying to reimagine what public safety means.

Chris Lombardi is the author of "I Ain’t Marching Anymore: Dissenters, Deserters and Objectors to America’s Wars." Her work has appeared in The Nation, Guernica the Philadelphia Inquirer.

On Kimani Gray, and on not walking away