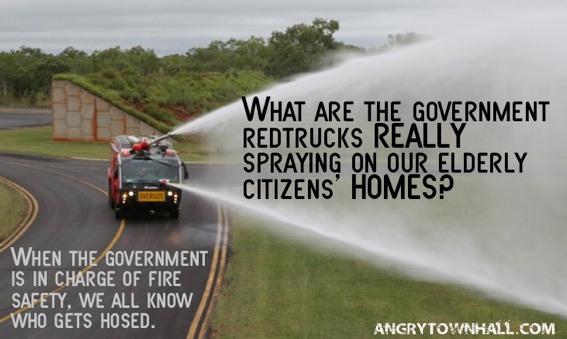 Nothing I’ve seen has captured the inane logic of most town hall protesters better than the satirical website angrytownhall.com, which claims to be organizing a day of nationwide protests against our “socialist fire departments.”

Our aim is that by 2011, all fire services will be provided and funded through private fire companies, including but not limited to: Blackwater (XE), Halliburton, Monsanto, Lockheed, and China. 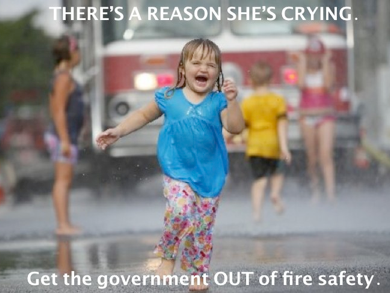 The site also contains some rather hilarious photos and sayings, such as “The tree of liberty needs to be watered from time to time with water from PRIVATE fire departments” and “This truck is red for a reason.” But my favorite, which appears on their Facebook page is: “When fascism comes to America, it will be wrapped in asbestos and carrying a fire hose.”

Others have chimed in on the Facebook message boards with some rather ingenious comments, such as this imagined conversation between a person whose house is on fire and a private insurance company handling the 911 call:

Claim Representative: OK, Mr. Smith. I’m sorry, it appears that we have not received your last payment, and therefore under Article 32, Section U, paragraph 76, coverage is suspended until payment is received.

Caller: WHAT? I paid the bill. I even saw this morning that the check cleared! Oh my God! The roof is falling in! Holy S—!

Claim Representative: Sir, there is no need for profanity. If you can fax me a copy of the cancelled check, we can reinstate your policy within three business days of receipt of the fax.

Caller: MY HOUSE IS ON FIRE RIGHT NOW!

It will be interesting to see if the absurdity revealed by this satirical campaign will amount to more than just an online presence. It seems as though the organizers have hopes for more. They’ve set the day of action as September 9 at 4pm. Further details have yet to be announced.

The revolution will not be extinguished