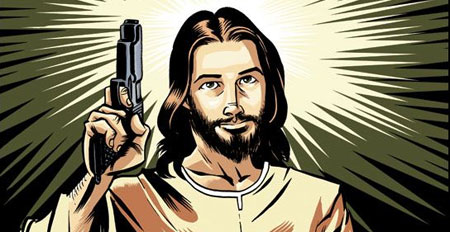 Last weekend I had an opinion piece published in the Melbourne Age, a major Australian daily newspaper.  It was responding to the recent scandal of gunsights used by Australian, New Zealand and U.S. soldiers having been inscribed with Biblical references.  This story gave me the opportunity to clarify both the fact that Christianity is intended to be nonviolent, and that nonviolence is never passive in the face of injustice or oppression.

There were a number of comments after the original article, and the discussion has continued in the letters to the editor.  Two objections were raised in Monday’s newspaper, and two responses to the objections appeared in Tuesday’s paper.

It’s a rare event when nonviolence (let alone Christianity!) gets a run in the mainstream media in Australia.  This was a source of great encouragement.

It also made clear just how far we have to go in explaining and communicating nonviolence.  Two things in particular frustrated me.

2. It might seem pedantic, but the pervasive editing of the correct ‘nonviolence’ to the incorrect ‘non-violence’ is a demonstration of the kind of misunderstanding nonviolence receives in mainstream culture.

Have a look and see what you think.

In Uganda, an activist’s resurrection is a victory for a growing movement

Who would Jesus shoot?