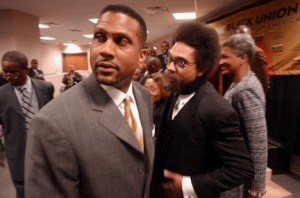 PBS’s Tavis Smiley, a disciple of Cornel West and a powerful force for elevating public discourse, has done a tremendous service by framing his second episode of Tavis Smiley Reports around Martin Luther King Jr.’s most controversial speech: the speech, one year to the day before his assassination, when he stated his opposition to the Vietnam War. The show, which premiered last night, can be watched online as well.

What makes Smiley’s program particularly brave is the way in which is insists that King’s speech that night at Riverside Church is entirely relevant today. We have our first black president; in her invocation at Obama’s inauguration, Diane Feinstein spoke of the history of nonviolent struggle that brought him there. Yet, he is a war president. Like Johnson during King’s time, Obama has an ambitious domestic agenda being tragically thwarted by his commitment to pursuing wars abroad and feeding the military machine. Obama most explicitly distanced himself from King’s antiwar commitments in his Nobel Prize speech last year. Smiley insists, as in his evocative interview on Talk of the Nation, that Obama is wrong to make this separation. King was not some naive outsider who spoke out against violence only because he didn’t really have to deal with it. King carried enormous responsibility. Violence tempted him, but he knew it had to be resisted.

This is Smiley, on Obama’s Nobel speech:

Had the president stopped by giving Martin King his just respect—as he did, to his credit—it would have been okay. But when he turns the corner and then says, essentially, that Martin’s philosophy wouldn’t work in today’s world, he goes on to say that Dr. King didn’t know al-Qaida, as if to suggest that Martin didn’t understand evil, that Martin didn’t understand violence, that he himself had not been subjected to it. He was stabbed at one time. His house was bombed.

He gave a famous speech about the fact that he—when stabbed in New York at a book signing, the blade was just a scintilla away from his aorta. He turned that into a great speech when he got out of the hospital. Because he received a letter from a little white girl who said, Dr. King, I read the newspaper that had you sneezed that blade would’ve moved, ruptured your aorta and you would’ve drowned in your own blood. And King gives a great speech out of that hospital called “If I Had Sneezed.” It’s a powerful refrain, Neal, about what would’ve happened in his life, what he would’ve missed if he had sneezed at that very moment.

So King understood violence. Of course, he’s assassinated in Memphis a year to the day later after giving this speech. So when the president suggests—and whether directly or indirectly, intentionally or unintentionally diminishes in that Nobel speech Martin’s powerful, nonviolent philosophy, it tweaked some people, and you’ll see that in the presentation Wednesday night.

Let’s stop putting words in Martin’s mouth, who knew that it was nothing short of racism to expect nonviolence of oppressed minorities at home while packing them away in ships to do enormous violence abroad: “As I have walked among the desperate, rejected, and angry young men, I have told them that Molotov cocktails and rifles would not solve their problems,” he said that night in Riverside. “But they ask—and rightly so—what about Vietnam? They ask if our own nation wasn’t using massive doses of violence to solve its problems, to bring about the changes it wanted.” Nonviolence on American streets and the massacre in Vietnam represented an impossible contradiction that no political convenience could soothe. “For the sake of those boys, for the sake of this government, for the sake of the hundreds of thousands trembling under our violence, I cannot be silent.”

Speaking this way cost King his popularity, and it cost him his good relationship with President Johnson. His advisers counseled him against it, for all the harm it might do to the civil rights movement, but he wouldn’t let them stop him.

“I have moved to break the betrayal of my own silences,” said King at Riverside, “and to speak from the burnings of my own heart.”

As the US empire declines, what openings exist for progressive movements?

MLK’s Vietnam speech is back