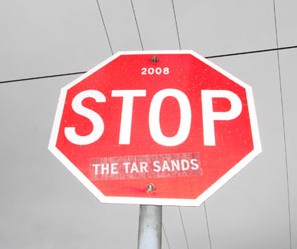 Yesterday, a group of 11 leading environmental activists – including Bill McKibben, James Hansen, Wes Jackson, Maude Barlow, Naomi Klein and Wendell Berry – released a powerful call to action. Beginning in mid-August, they are organizing a unique, sustained campaign of civil disobedience at the White House to stop the construction of the Keystone XL pipeline, which if approved, will connect Canada’s tar sands to oil refineries in Texas.

After addressing why the extraction and use of oil from tar sands is so destructive to the environment, the letter gives an outline of the group’s action:

We will, each day through Labor Day, march on the White House, risking arrest with our trespass. We will do it in dignified fashion, demonstrating that in this case we are the conservatives, and that our foes—who would change the composition of the atmosphere are dangerous radicals. Come dressed as if for a business meeting—this is, in fact, serious business. And another sartorial tip—if you wore an Obama button during the 2008 campaign, why not wear it again? We very much still want to believe in the promise of that young Senator who told us that with his election the ‘rise of the oceans would begin to slow and the planet start to heal.’

And one more thing: we don’t want college kids to be the only cannon fodder in this fight. They’ve led the way so far on climate change—10,000 came to DC for the Powershift gathering earlier this spring. They’ve marched this month in West Virginia to protest mountaintop removal; Tim DeChristopher faces sentencing this summer in Utah for his creative protest.  Now it’s time for people who’ve spent their lives pouring carbon into the atmosphere (and whose careers won’t be as damaged by an arrest record) to step up too. Most of us signing this letter are veterans of this work, and we think it’s past time for elders to behave like elders. One thing we don’t want is a smash up: if you can’t control your passions, this action is not for you.

This won’t be a one-shot day of action. We plan for it to continue for several weeks, to the date in September when by law the administration can either grant or deny the permit for the pipeline.

This campaign has a lot of potential for numerous reasons. First, it has a direct, immediate goal. Second, they are calling for a broad coalition of young and old. Third, they are asking participants to be mindful of their image and to wear nice clothes, which is an important issue that we’ve addressed on this site at several points. Fourth, they’ve explicitly requested that those interested in violence or property destruction stay away, which will make it harder for the mainstream media to write off the campaign. And most importantly, it is a sustained effort over several weeks, with some recognizable names already signed on to participate. One of the most important things that activists in the US seem to have learned from nonviolent movements across Europe and the Arab world this year, is that to have a real impact, coming out to protest for a day simply won’t cut it any longer.

If you want to participate in this action, sign up here, and as plans come together in the next few week, they say they’ll “be in touch with you to arrange nonviolence training; our colleagues at a variety of environmental and democracy campaigns will be coordinating the actual arrangements.” I can say with near certainty that Waging Nonviolence will be there to cover the action and hopefully participate in it as well.

One name that is unfortunately not on the letter is Al Gore, who just wrote a long article for Rolling Stone critiquing the Obama administration for not doing more to stop climate change. While we have called on Gore to participate in civil disobedience in the past, as Sarah Laskow writes at the American Prospect, here is another prime opportunity for him to do just that:

…I think one of the more powerful things he could do at this point would be to join this protest. Imagine Al Gore marching on—getting arrested in front of—the White House where he once served and once hoped to sit in as president. I think that image could have an impact. Half of the country did once vote for him, after all.