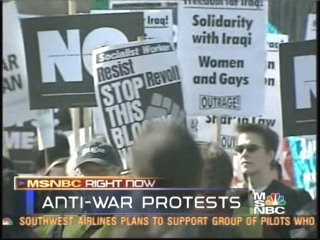 In an interesting two-part series published by Nieman Watchdog, former executive director of The Fund for Investigative Journalism and reporter for the Washington Post John Hanrahan explores why the mainstream media so often ignores antiwar protests in the US.

After discussing several prominent protests over the last couple years that have recieved short shrift or no attention at all from the mainstream media despite their newsworthiness, Hanrahan asks Vernon Loeb, local editor of the Washington Post, about the paper’s policy in covering activism and why they have often not covered large demonstrations in the capital. Not surprisingly:

Loeb told Nieman Watchdog that the Post has no specific policy on covering antiwar protests, but rather: “We make decisions on a case-by-case, day-by-day basis. We try to assess the newsworthiness in the context of all the events that are happening on any given day and then make a judgment on what to cover.” In making daily assignments, Loeb said, they draw on AP’s and other organizations’ day-book listing of events, as well as a regular barrage of event notifications sent to the Post via email and Twitter.

Although the Post like other major news media has experienced severe staff cutbacks in recent years, Loeb said that decisions not to cover a particular event are “not really a case of lack of resources.” If an event is deemed newsworthy enough, “we would have the resources to cover it.”

Loeb, who became the Post’s local editor just over five months ago, noted that because Washington is the nation’s capital, it draws numerous rallies of one type or another every week, and the paper has to make decisions on which ones are newsworthy enough to warrant coverage. He said “obviously, any demonstration that draws large crowds,” or produces a large number of arrests is one that should be covered. In answer to another question, Loeb said that the Post would also take into consideration anniversaries of events – such as the start of a war – in determining whether or not to cover a specific antiwar protest.

Despite Hanrahan’s obvious sympathy for antiwar protests, he never tries to offer an explanation for why the peace movement recieves such poor coverage in the mainstream media. There are, I believe, several reasons for this situation that are worth exploring.

1) While recent antiwar protests have drawn thousands, their scale has been smaller than in the past. It’s much harder for the media to ignore tens or hundreds of thousands of protesters without very clearly revealing their biases.

2) Many protests against the war and for other progressive causes are quite formulaic. The signs and speeches and events seem scripted and are hence easier to ignore. Protests that are more creative or humorous—like those organized by the Yes Men, for example—often seem to attract more favorable attention not only from the public at large, but also the media.

3) Protests that have all the proper permits and are over within an hour or two do register discontent, but they often do little to put real pressure on decision makers to change course. On the other hand, nonviolent action that seriously disrupts business as usual, like blockading roads, occupying buildings or shutting down industry through strikes, can put real pressure on those in positions of power to meet protesters’ demands and will in turn garner more extensive media coverage.

4) And finally, since the mainstream media are owned by enormous corporations that have their own interests—which generally run contrary to the interests of those struggling for radical or progressive social change—getting positive news coverage of protests will always be an uphill, and sometimes futile, battle. As Noam Chomsky has said:

[U]sually political demonstrations get very negative reporting in the United States, no matter what they’re for, because they show people they can do things, that they don’t just have to be passive and isolated—and you’re not supposed to have that lesson, you’re supposed to think that you’re powerless and can’t do anything.

In spite of all these challenges, I don’t think activists should give up on trying to get the attention of the mainstream media because they are still how the vast majority of Americans get their news. Activists need to work on building positive relationships with journalists working for these news oultets, and must make every effort to ensure that the mainstream media simply cannot not pay attention to their actions.

Why is there so little mainstream coverage of antiwar protests?