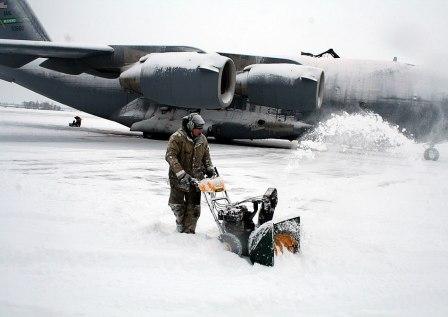 It is going to be a long, cold winter. That is what meteorologists are warning throughout the country. AccuWeather.com’s Long Range Forecasting Team says the United States should be preparing for “another brutal one” this season, with the Midwest bearing the brunt of the assault.

For most in the northern parts of the country, preparing for winter means making sure your oil tank is full, checking your storm windows or sticking sheets of plastic over your windows and plugging any new drafts. But, this year, it might be time to take the fight to stay warm to Washington, D.C.

Why? Because inside that cold, cold Beltway, they are spending money on war instead of keeping Americans warm! Sounds simplistic? Well, listen to this.

The price of fuel is going up. USA Today reported in October that “homeowners who use heating oil will see their bills rise 12% to $2,124 from $1,906.” Folks who heat with propane or natural gas are also going to see increases. At the same time, more Americans are slipping (try “plummeting,” “careening”) into poverty. According to census data, another 2.6 million people joined “the poor” last year making the official count of poor people in the United States 46.2 million—the highest number in half a century.

In 2011, the United States allocated $4.7 billion to fuel assistance programs throughout the country. If you were poor, cold, had a place to live and could prove all three, you could fill your tank for most of the winter on the federal government’s dime under a program called Low Income Home Energy Assistance Program (LIHEAP). It was great!

For 2012, the Obama administration proposed a 45 percent cut in these home-warming, life-saving funds—suggesting $2.57 billion for heating assistance in 2012. Not because there were fewer cold or poor people, but because the government is trying to be leaner. It is certainly being meaner. The National Energy Assistance Director’s Association says that the federal program assisted 8.9 million households—an increase of 54 percent since 2008. Further, the Association projects a record 9.4 million households will need heating fuel assistance in 2012.

The fight is on. The Senate has restored the funding somewhat, pushing the cut to $3.6 billion, and in the House lawmakers settled on $3.4 billion.

With the economy in the toilet and a new fiscal crisis every other day, this one program seems like small potatoes. With the spectacular (although unsurprising) failure of the “Super Committee” last month, the stage is set for even deeper cuts to vital social programs like LIHEAP.

Let’s review the Super Committee’s. In the face of soaring deficits, the deal was: 12 members of Congress, six from each side of the aisle get together and come up with a plan to cut the deficit by $1.2 trillion over ten years. If they could not do it, the sword of Damocles that hung over their heads was automatic cuts to the military budget and social welfare spending. The simple solution of raising taxes on corporations and the very wealthy was a political impossibility, despite the fact that people in the United States pay some of the lowest taxes in the world.

So unless a new solution emerges from the bipartisan morass, we are looking at serious cuts to domestic and military spending come 2013. The big number is $500 billion in cuts—sounds dramatic, right? But, over ten years. $50 billion a year. Not such a huge problem, unless most of these weapons systems are political boondoggles rather than security necessities. Ah, yes… that is the trouble, isn’t it?

Given that the war in Iraq is over and all U.S. troops are slated to be home in time for Christmas, Hanukkah and Kwanza, cutting the military should be a piece of cake, right? Especially since the Pentagon is going to try and wind down the Afghanistan war by 2014. No problem-o. We should have heating assistance and other social welfare programs back up and running in no time, right?

It’s true, the wars in Iraq and Afghanistan are expensive, and ending them should mean big savings. According to the “Costs of War” research project by Brown University’s Watson Institute for International Studies, the final bill on these military operations and their long term economic consequences will run between $3.7 trillion and $4.4 trillion. It is hard to wrap our puny brains around numbers this big, but one way to think about it is that the higher end of that estimate would provide heating assistance to poor Americans for the next one thousand years.

But, even with the big wars “winding down” (hey, we can hope, right?), the United States being the United States, we still find ourselves mired in ill-timed kerfuffles that cost the taxpayers a lot of money. Hey, even our little “no boots on the ground” military foray into Libya—commenced in the midst of our most dire economic straits in decades—cost a pretty penny. The Council on Foreign Relations estimates that—excluding the inevitable covert aid—the total direct expenditures of America’s role in Libya are approximately $1.1 billion and counting.

No one asked us (or the majority of the Libyan people, for that matter) if we’d rather see gruesome images of the murder of Muammar Qaddafi or more money for fuel assistance in this country. The United States’ less than heroic role in the Libyan revolution is a topic for another day, but I will just say that I appreciated the thoughts of Serbian nonviolent activist Srdja Popovic on the matter: “I personally don’t think that foreign military intervention can bring democracy in any place in the world.”

Back to cutting the military budget. Defense Secretary Leon Panetta must know that these cuts could be coming down the pike beginning in two years. But he is not planning for it. In fact, as The New York Times reported a month ago, he is actively not planning for it. He was in my backyard in November telling shipbuilders and submarine builders at Electric Boat in Groton that such cuts would “totally hollow out the force.” When we hear such rhetoric (Panetta sounded a little Valley Girl there, didn’t he?), we need to remember that this is the same force that is building airplanes that cost $18,000 an hour to operate. Workers at Electric Boat will build two nuclear powered and nuclear capable Virginia Class attack submarines this year, each with a price tag of about $2 billion. Do we need them? The Navy says yes—we need 12 new subs. The Arms Control Association and the Brookings Institution say we can more than make do with eight, which would save $120 billion over the lifespan of the subs. I say we need none—the only ones who need ’em are the weapons manufacturers—Northrop Grumman and General Dynamics and a handful of others—that make so much money off of building them. Why should we be lining their pockets? Not to mention the fact that each one of these subs is equipped to carry 16 nuclear missiles; the fewer we have, the lower the chances are of nuclear Armageddon, right?

To put the hand-wringing over cutting the military budget into perspective, the Center for Strategic and Budgetary Assessments notes that beginning to enact the automatic cuts to basic defense spending for 2013 would mean a Defense Department budget of $472 billion—which is about what the United States was spending in 2007 (adjusted for deflation). Not exactly the dark ages, and still way out in front of our rivals and enemies.

I see no reason why the same government that pays $18,000 an hour to operate a fighter plane we don’t need (to say nothing of how much it cost to develop and build the fool F-22s—hundreds of billions), that spends $2 billion to build submarines we don’t need (and shouldn’t have), that gives tax breaks and big loopholes to private corporations like General Dynamics, Northrop Grumman and Lockheed Martin, and yet this same government can’t find a few extra billion dollars to make sure that poor people are warm and safe this winter.

There is a bipartisan push, particularly among members of Congress from northeastern states, to get the LIHEAP refunded at $4.7 billion for next year. You can learn more and get involved by visiting http://www.liheap.org/ and clicking on your state.

It means choosing people’s welfare over weapons. And it is only right.