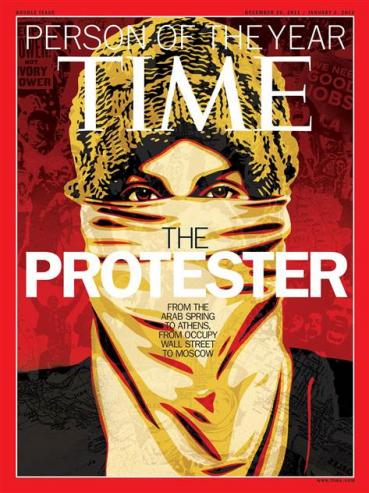 It’s that TIME of the year again—ha!—when TIME magazine announces the Person of the Year, a tradition generally meant to remind us which depressing white men in suits happen to rule the world. (U.S. presidents tend to receive it when elected. George W. Bush, for instance, won the distinction in both 2000 and 2004.) TIME’s editors made a slightly more whimsical choice this year, following in the pattern of non-election years like 2006 (“You”), 2003 (“The American Soldier”), 1998 (“The Endangered Earth”). While those might seem pretty depressing too, this year’s choice represents something that, for millions of people around the world, is a source of enormous hope. That’s because it is them—though not so much in the narcissistic style of 2006. It’s official, at least according to this particular dinosaur-like, mega-corporate newsmagazine: the 2011 Person of the Year is “The Protester.”

As I first saw this announcement percolating on Twitter, being spread around proudly every which way by Occupy Wall Street-allied accounts, all I could think was: what took you so long? Where were you?

Where, I mean to say, was the American press when Tunisia—or Egypt—first started lighting up, when we at Waging Nonviolence were glued to Al Jazeera and our Twitter feeds, wishing we had the means to be there ourselves? In the American news, the start of those revolutions was hardly a blip—that is, until Anderson Cooper got beaten up in Cairo.

While the Madison, Wisconsin, Capitol was under occupation by thousands upon thousands of protesters, I remember sitting in a dental office waiting room while, for the better part of an hour, CNN reported how and why Charlie Sheen was demanding a multi-million-dollar raise. I couldn’t believe it. Fortunately, at the same time, I was getting constant text-message dispatches from inside the Capitol thanks to Waging Nonviolence correspondent Quince Mountain. Our readers were getting them too.

Finally, in late summer, I remember sending story pitches left and right to editors I work with about how an American Autumn was coming—with almost no response—and making lists here on the site of all the ambitious uprisings that were then in the works. I remember being told by an editor in Washington, D.C., in fact, that practically no protests are worth covering; I then had the pleasure a few days later of sending him a handful of articles from his own publication revealing the effectiveness of the first Tar Sands Action, which my colleagues at Waging Nonviolence had been reporting on for weeks.

In the early days of Occupy Wall Street, I remember being woken up in a tent in occupied Liberty Plaza by an NYPD detective, then watching protesters get thrown to the ground, dragged, beaten, and hauled away to a mental hospital; that was the first day it rained, when not even the local TV news trucks could brave the weather to keep an eye on the police. That week, Waging Nonviolence had to remind those at The New York Times not to ridicule their fellow Americans who were taking a courageous stand for justice. When the national news finally started showing up at the plaza the following week, after an unprovoked police attack on protesters, most reporters didn’t even bother to figure out how the protesters got there. They just wanted interviews with “the pepper-spray girls.”

Now, at last, the news industry is starting to get it: real power is people power. This revolutionary year it’s especially obvious, but actually this is true all the time. (Just follow our Experiments with Truth column to see how.) The world needs a new kind of reporting—a kind that we’re trying to help foster on this site, a kind that takes the power of well-organized, ordinary people more seriously than the power of those who just dress like they have power, or sit in offices that say they have power, or buy their power with money swindled from the labor of others, or act like they have a lot of power because they’re wielding a gun. Or a personal army.

As we move into 2012, maybe those of us in the media can make a resolution to ourselves that we’ll try and take the politics of regular people seriously again. To that end, I’m grateful that TIME chose rightly, finally; we so, so much needed the reminder. Good thing it wasn’t an election year.

New data offers insights into the dynamics of nonviolent resistance

May 12, 2018
Jonathan Pinckney and Erica Chenoweth

Fight for $15 organizers demand a union